What about you, what are your hopes? 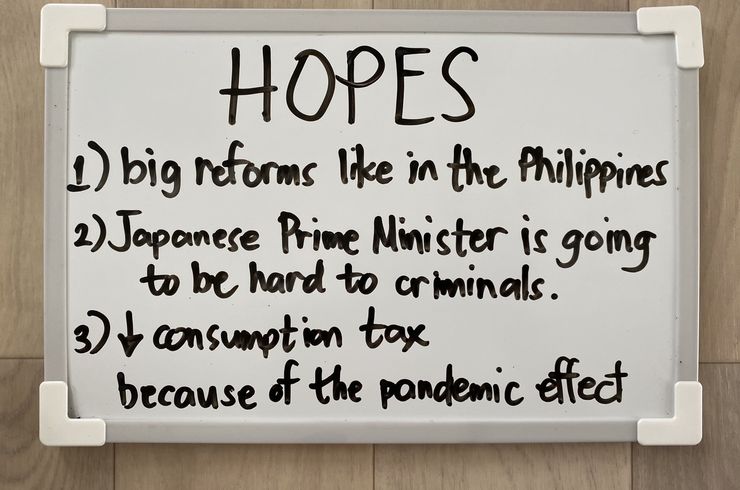 P.S. Please check the bolded letters for your new vocabulary.

"What are your hopes for the new prime minister's term - Prime Minister Suga?"

During his term, he faced all issues may it be political, health, economic, or social. He solved them in a way he thought was best for the people.

The pandemic was one of his biggest challenges as people questioned him how he handled the problem and described it as an ineffective approach.

With all the hard work he had done, his health surrendered bit by bit. Thus let him decide to step down from his position and wait for the new prime minister to take over.

September 09, 2020 - The former chief cabinet secretary of Prime Minister Abe - Yoshihide Suga, became the 99th Japanese Prime Minister. And he is also the first prime minister in the Reiwa Era.

This news brought so much wonder to many residents in Japan.

Concerning that, one of my students chose her news about the newly elected prime minister. I was reluctant to talk deep regarding politics since I know that majority of them are not interested in politics as much as I do. Why? Maybe because they are not involved in voting who they want to serve the country.

I am amazed of her bravery of this topic.

I usually write three questions on the whiteboard, and my third question was this: "What are your hopes for the new prime minister's term - Prime Minister Suga?"

There was silence for a while in the room and she answered.

First, big reforms like in the Philippines. Second, the Japanese Prime Minister is going to be hard for criminals, and the third less consumption tax.

I was shocked and in awe for the following reasons.

As a foreigner working here, I am already grateful for my job, earn money earnestly, and live peacefully.

However, the answers that my student gave me was an eye-opener to me to hope. And I have two things I hope as a resident here.

I have my beliefs and principles that nothing is impossible if we work and serve diligently for our goals. It may take time, but what matters is how you get there and what you learned along the way.

My student and I have shared our hopes. What about you, what are your hopes for your government?

Credit on the photo: Our student- M.K.